The sexualisation of our society 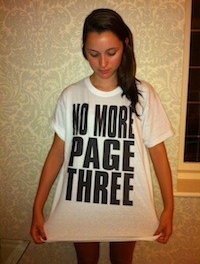 This week has seen widespread condemnation of the publication of pictures of the Duchess of Cambridge topless.  Ironically The Sun, one of the first newspapers to condemn the publication of such intrusive photographs, runs a picture of a topless young woman every day and has done so since 1970.

There have been many campaign to have the page removed before; most notably by Claire Short in the 1980s who was branded ‘fat and jealous’ by the paper when her parliamentary bill failed.  However, concerns about press ethics have made this a hot issue once again.

Author and actor, Lucy-Anne Holmes, was enraged during the Olympics, when British women such as Jessica Ennis and Victoria Pendleton were successfully representing their country, that the biggest image of a female in the paper was the daily topless offering.

She wrote to the editor of The Sun and asked him to stop running topless pictures on page 3.  Predictably she didn’t receive a reply and so, on 5th September, she decided to set up a petition called ‘No More Page 3’ asking the paper’s editor to stop showing topless women in his paper.

She promoted her petition through her social media accounts and it soon caught the public imagination and went viral.  At the time of writing, over 28,000 people have signed it and it has been mentioned in almost all the broadsheet newspapers although, predictably, not in The Sun.

So much attention has this petition received that one of the UK’s leading bookmakers is now taking bets on when it will reach 100,000 signatures.  A spokesman for Paddy Power said: "The smart money says it will happen sometime in the next couple of months."

The Sun introduced a topless girl on page 3 in November 1970; it was the first time a British newspaper had run a nude photograph and, although controversial, it boosted circulation so from 1975 it became a daily feature.

From our perspective in 2012, with hard-core pornography available to all at the click of a mouse, it can seem so innocent.  However ‘page 3’ lead the way and has contributed to the objectification and commodification of women and their bodies in our society.  It paved the way for much stronger images becoming mainstream in newspapers, magazines and on screen.

As such it has impacted all of us whether or not we buy or read the paper.  Parents report that their children are being prematurely sexualised and forced to grow up too fast, cosmetic surgery rates have increased by nearly 20% in the last four years and an unrealistic body ideal is damaging our society by wreaking havoc with self esteem and affecting health and relationships.

We are delighted that this issue is once again in the news and we hope the petition continues to grow and shows that the picture of women presented by The Sun is unacceptable.  But let’s not just tinker around the edges; there is an even greater menace freely available to all.

It is to be hoped that all those who sign this petition also consider the effect that online pornography is having.  It’s effect on our society - not just those who use it but all of us – is potentially even more devastating.
Posted by Mediawatch-UK at 02:18