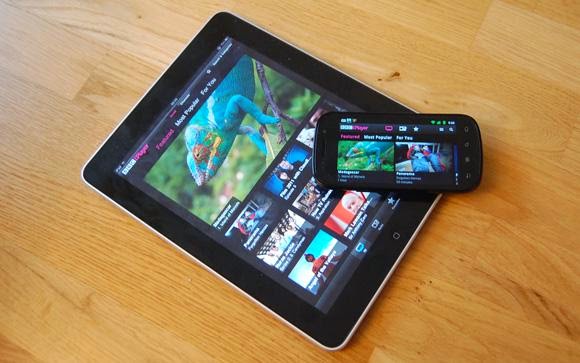 Earlier this year the Director General of the BBC, Tony Hall, announced plans to make BBC 3 – the corporation’s ‘youth’ channel – a completely online channel.  Despite opposition from presenters and some executives the new head of the BBC Trust, Rona Fairhead, has hinted that the trust will approve the move saying that the BBC should do even more to cater for young viewers who prefer to watch television on their tablets and mobile phones.

Speaking to the culture, media and sport committee she said: “The statistics show that this group are watching less. They are certainly watching very differently…. typically they watch on-the-go through the devices they have.  Catch up television appears to be a way the younger audience will use the BBC and view programmes.”

Presently the channel broadcasts from 7pm to 4am, largely post-watershed.  Much of the channel’s content is available online with a parental guidance prompt and can only accessed by ticking a box confirming that the viewer is over 16 – hardly beyond the wit of a much younger child.  Moving this channel online without updating the protections will compound the problem.  Any existing computer filters are unlikely to block access to iPlayer and, as the parental control feature is not widely advertised, it is reasonable to assume that the majority of parents will not have set up controls to protect their children.

When the BBC Trust looked at the iPlayer back in 2010 we asked them to consider the inadequate protection available.  We called for a more robust system to protect children.  The Trust did not address this in their findings but they did recommend more was done to advertise the available parental controls.  However this has not happened.

We have written to Rona Fairhead outlining our concerns about the lack of protection for children afforded by the BBC’s iPlayer.  We have pointed out that, should BBC 3 move online, these problems will be magnified and we have asked her to consider ways in which the protections offered by the television watershed could be replicated online.
Posted by Mediawatch-UK at 07:43 No comments:

Mary Whitehouse on the BBC 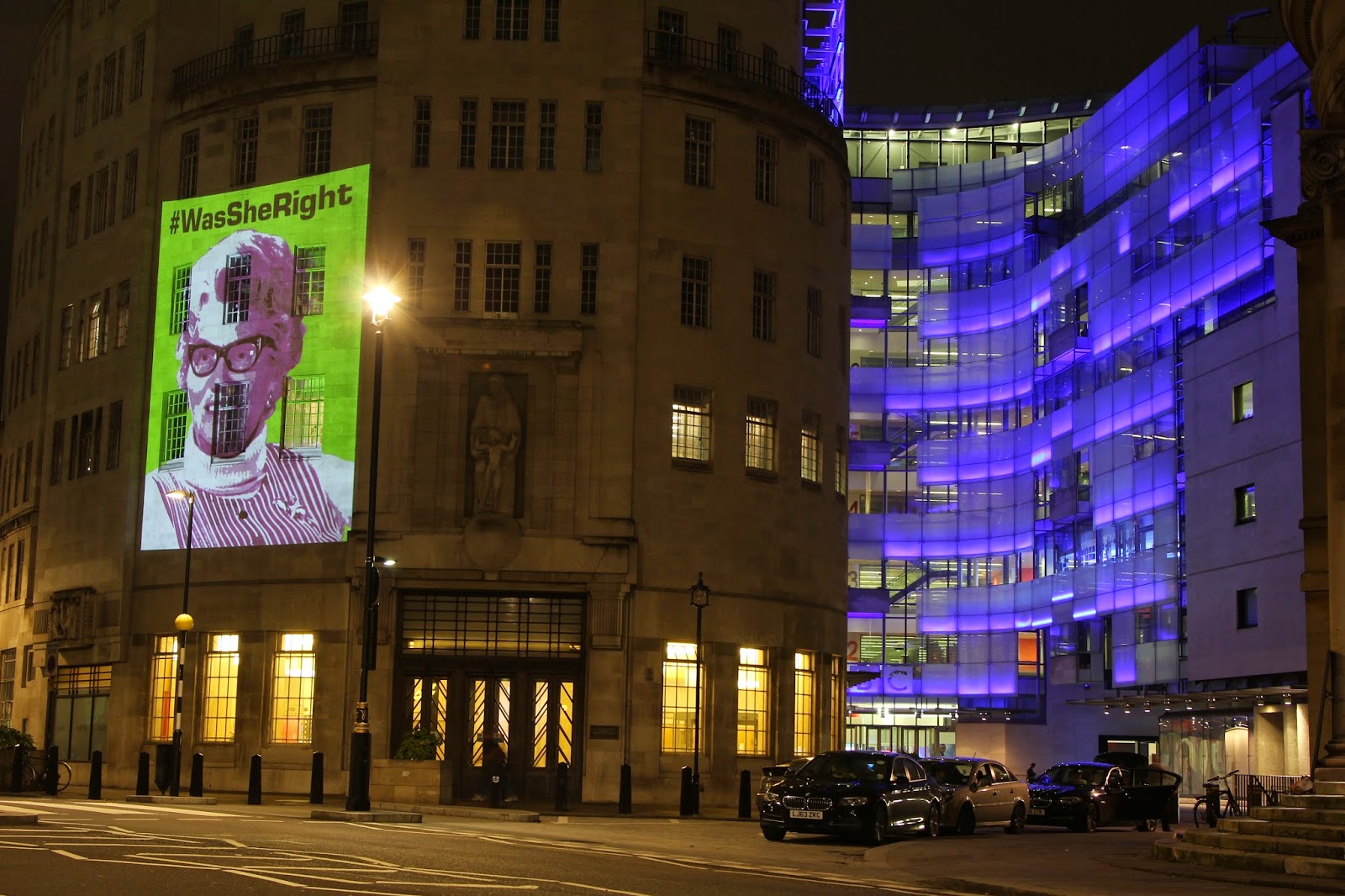 This is a picture of the projection on the BBC’s Broadcasting House.  Mary Whitehouse was famously blocked from appearing on the BBC during the 1960s because of her criticism of the corporation’s output which she believed was potentially harmful.

Last Tuesday evening, we projected images of Mary Whitehouse in locations all over London asking people to consider whether or not she was right all along.  At the same time we released the results of new research which we commissioned to mark our anniversary.  We wanted to know what the British public felt about the state of media, its impact on today’s society and whether the public feels confident that complaints about disturbing or unsuitable content are being dealt with effectively.

Our investigation found that, overwhelmingly, the public think programme makers and schedulers crossed the line in allowing increasingly inappropriate content to invade our screens.  Everyone surveyed reported viewing inappropriate content before the watershed, including: violence, sexual activity, racism and offensive language.  However, only 26% had actually done anything to express their dissatisfaction because they do not feel their voices are being heeded when they complain.

The highest percentage of complaints was made about sexual activity (47%), followed by offensive language (38%), violence (36%) and inappropriate adult issues such as drug taking, gambling etc (34%), all shown before the watershed. More people had complained about content involving sexual violence (33%) than about racism or other discriminatory content (21%).   This would not have come as a surprise to Mary Whitehouse who said of television: “if it is sometimes a debasing influence, it could equally be a great ennobling force if we cared enough.”

When respondents were asked whether inappropriate content might have an effect on people’s behaviour, 94% believed that it could, citing violent horror, explicit sexual content, music videos and soap operas as particularly problematic.  With such a high percentage of the public feeling that this kind of subject matter can be potentially harmful, Mediawatch-UK believes that broadcasters have a duty to take this more seriously.

Writing in 1977, Mary Whitehouse said: “What we are is inseparable from the cumulative effect of all that we have seen, read and experienced.”  How prescient this seems now.

39% of those surveyed said they hadn’t bothered to make a complaint because they either feared that nothing would be done about it, they didn’t know whom to contact or sometimes they didn’t want to be seen as a ‘complainer’.  They gave a number of reasons for this:

Of those that did complain, either to their media provider, TV station, the programme makers, OFCOM or via social media, 40% either received no response at all or were dissatisfied with the outcome.  Many received a computer-generated form which was never followed up.  Others felt strongly that if the body to which they had expressed their complaint had simply apologised they may have been satisfied, but they were denied even that small gesture.

OFCOM’s failure to regulate adequately in the past has led to what the regulator itself described as being ‘at the very margin of acceptability’ to become mainstream. Is it then any wonder that people are not making their views known about inappropriate broadcasts because they don’t think anything will come of complaining.

Many today would concur with Mary Whitehouse’s comment on the TV regulator: “Instead of the government providing a vehicle for the voice of the viewer, it has provided little more than a convenient means for the broadcasters to deflect criticism of their programmes.”  It would appear that Mary Whitehouse was right after all.
Posted by Mediawatch-UK at 07:43 No comments: 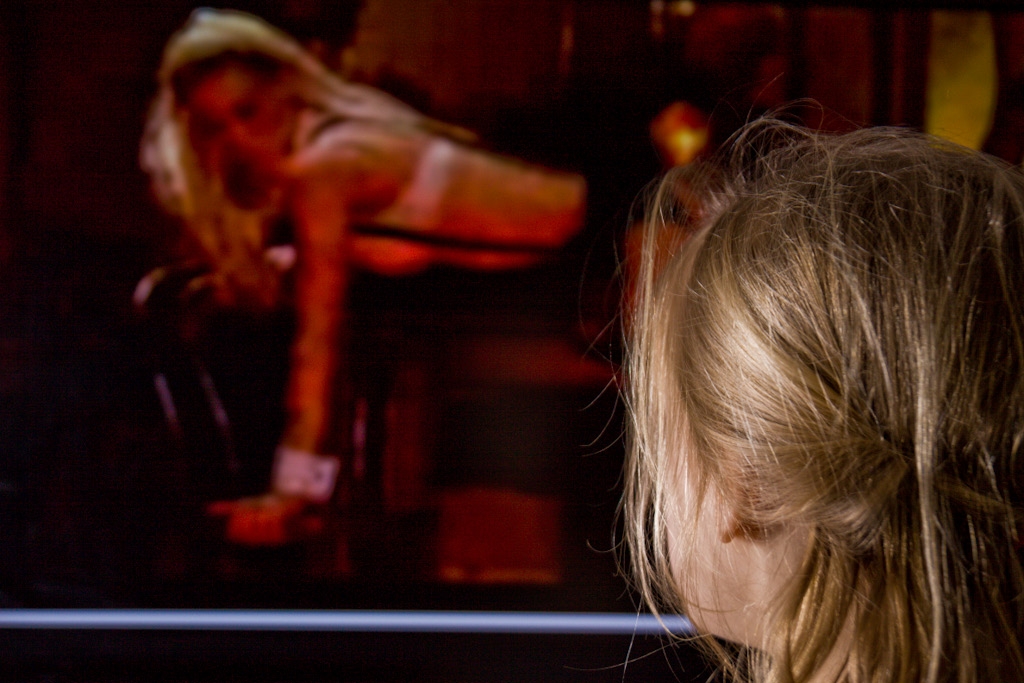 Today sees the launch of a pilot scheme to introduce film-style age ratings for music videos to help protect children from unsuitable content.  This has come in response to huge public concern that what has become mainstream in music videos in recent years is now barely inches away from pornography.

Recent videos from Britney Spears, Rhianna and Miley Cyrus have included nudity, highly sexualised dancing and imagery and visual references to prostitution.  What is particularly disturbing about this is that the fan base of all these performers is so young.  Watching them, one could be forgiven for thinking that these videos have been produced to appeal to an adult male audience but, in reality, they are far more likely to be viewed by school children.

Parents who responded to the government’s Bailey Review in 2011 cited music videos as a major concern.  The report subsequently recommended that age restrictions should be applied to music videos to prevent children buying sexually explicit videos and guide broadcasters over when to show them.  Ministers called on the industry to develop solutions so that more online videos, particularly those that are likely to be sought out by children and young people, carry advice about their age suitability in future.  This new scheme is a response to that call.

The new measures will see websites YouTube and Vevo and three of the UK's top music labels - Warner, Universal and Sony – working with the BBFC to apply age ratings to videos before they are made available online.

Presently this classification will be limited to the UK, so it will not apply to some of the most explicit videos by the likes of US stars Miley Cyrus and Jennifer Lopez but the Chief Executive of the music industry body, the BPI, is hopeful that "other countries might see we're taking a lead, and if it works they might follow suit."

This is a welcome move and we will be watching with interest to see how it works in action.  However, the scheme is a voluntary one but for maximum impact it needs to be mandatory across the industry.  It will not be the ‘silver bullet’ which guarantees protection to children watching music online but it does offer parents another useful tool to help them safeguard their children and it is an important first step in establishing very clear boundaries on acceptable standards in videos.
Posted by Mediawatch-UK at 07:42 No comments: