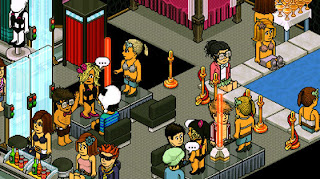 This week a Channel 4 investigation revealed that the popular virtual world for children, Habbo Hotel is hosting seemingly routine occurrences of sexualised or violent online chat as well as sexual approaches to young users.

The virtual world, which has more than 250 million registered users aged between 13 and 18 years-old and attracts 10 million users a month, is meant to be a fun game in which children create avatars and furnish their own digital hotel rooms.

Channel 4 News began to investigate the site after children who were helping them with research into cyberbullying raised concerns about Habbo Hotel.  A journalist posed as an 11 year old girl on the site and experienced not only pornographic chat but invitations to connect outside the site using messaging services and webcams.  Not only were these activities not blocked, but the infrastructure of the online world appeared geared to such sexualisation, with some rooms given names such as "naughty nightclub".

The investigation also found that there have been two recent cases where paedophiles have been convicted for sexually abusing dozens of children who they befriended on Habbo Hotel.

When news of the investigation broke parents, politicians and charities expressed their shock and concern.  A clear theme ran through all the reactions; businesses have to do more to keep young people safe.

Internet safety expert John Carr assisted with the investigation.  He said of the experience: “What I've just seen makes me think this is a dangerous place for youngsters to be.   Businesses shouldn't put children at risk. If they are in this business, they have to be in it in the right way - the right moderators, the right software, to stop this happening."

An NSPCC spokesman said: "We've been concerned for some time that websites designed for children and young people are vulnerable... I think the industry needs to take it a bit more seriously. They're reluctant to. It's not very good publicity for them to say: this is a fantastic resource for their child, and they may also be targeted for abuse."

The children's minister, Tim Loughton, said: "Businesses need to do more to help parents enable their children to use the internet safely and responsibly…  Sites where children – some really very young indeed – are known to be networking should have suitable and appropriate moderating."

Vice President of the European Commission Neelie Kroes said that Habbo could face closure if it did not protect its users.  She said “All of the technology companies should feel the heat.  But that is only part of the story.  It is the technology companies, the parents, the teachers, it also the government.  It is up to all of us to address the issues.”

She is quite right.  There is no ‘magic bullet’ that will guarantee children’s online safety.  Over the past few weeks the proposals to block pornography as a default measure have met with heavy criticism from an industry which would like to put all the responsibility onto parents and consumers.  This is unrealistic and business must pay its part in keeping our children safe.

Since the details of the investigation have been released businesses have been keen to distance themselves from Habbo Hotel.  A major investor in Habbo’s parent company has dumped its 13 per cent stake in the business and high street retailers including Tesco and WHSmith have withdrawn Habbo gift cards from sale.

With the right allocation of resources, moderation would have allowed Habbo to operate safely, but it must be assumed that those resources were sacrificed for profit.  The reaction this week is a clear signal that a business model which doesn't include safety and protection is unsustainable.
Posted by Mediawatch-UK at 08:39 No comments:

How the media affects us all 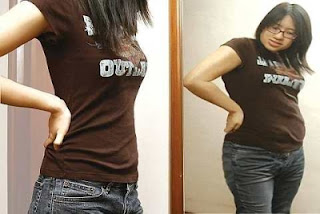 Earlier this week the All Party Parliamentary Group on body image published the results of its inquiry, Reflections on Body Image.

Many commentators expressed surprise at the existence of such a group but its report (which you can access here) made compelling reading.

The inquiry heard that more than half of the public has a negative body image and that body dissatisfaction in the UK was on the rise.  Girls as young as five are worrying about how they look and cosmetic surgery rates have increased by nearly 20% in the past four years.

According to the group’s report, pressure to achieve an unrealistic body ideal is now an underlying cause of serious health and relationship problems, damaging society by wreaking havoc with self esteem and affecting progress at school and work.

The inquiry concluded that unrealistic media images were largely to blame finding that a toxic combination of the media, advertising and celebrity culture amount for almost three-quarters of the influence on body image in society.

The chair of the APPG, Jo Swinson MP, told the BBC’s Today programme that "it's something which has existed for a long time... but in terms of the scale of it, that is what is new, and it is being driven by the proliferation of media imagery portraying a so-called 'perfected ideal' that is entirely unattainable for the vast majority of people,"

Speaking at the launch of the report the CEO of Central YMCA said: "It's clear there's something seriously wrong in society when children as a young as five are worrying about their appearance, based on the messages they are seeing all around them.”

The report made a series of recommendations which include:
We have long held that the media we consume affects our attitudes, outlook and behaviour for good or for ill.  This report bears that out and shows how tragic the consequences can be; one in three men would sacrifice a year of life to achieve their ideal body.

Neither is this influence related solely to body image.  Highly sexual media imagery, which is almost impossible to avoid, is leading to a generation of prematurely sexualised children; forced to grow up too soon and being led to believe that their value comes only from their sexual appeal or activities and behaving accordingly.  Similarly media which portrays violence as normal and ignores the humanity of victims is leading to an increased acceptance of violence in our society.

The measures recommended in this report are welcome but they must be seen as part of the ‘bigger picture’.  As a society we are shaped by the media which surrounds us; it is time for a wider debate about whether we are happy with the direction in which this has led us.
Posted by Mediawatch-UK at 07:38 No comments: