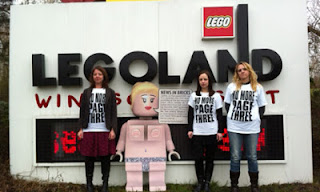 A petition asking the editor of The Sun to stop running topless pictures on page 3 of was launched last year.   It caught the public imagination and quickly attracted support from high-profile figures including Jennifer Saunders and Alistair Campbell.  It was soon followed by other online petitions, including one asking Lego to stop partnering with the paper because of its page 3 images.

This week it was announced that Lego’s two-year association with the paper was to end.  The company officially denied that the move was linked to online petitions; however a senior Lego executive had previously acknowledged concerns about its association with page 3 in an email to campaigners.

Even the paper’s owner, Rupert Murdoch, has now hinted that he is considering replacing the regular feature.  Last month he responded to a tweet calling for the pages removal because it was outdated saying: “You maybe [sic] right, don’t know but considering”.

News like this is a welcome reminder that we are being heard.  However other news this week is a stark reminder of just how important it is that we keep on fighting.

A survey of parents found that their children were under so much pressure to grow up in our over-sexualised culture that most parents thought childhood finished at the age of 12 with about a third of parents thinking it ended even sooner, at the age of 10.

Of even greater concern are figures released this week which revealed that children as young as five are committing sexual offences.  The NSPCC warned that ‘easy access to sexual material is warping young people’s minds’ and demanded that we “do more to shield young people from an increasingly sexualised society.”

They are quite right.  When the stakes are this high we cannot afford not to act!
Posted by Mediawatch-UK at 08:31 No comments:

The announcement that Iceland is considering blocking online pornography because of the damage it causes to society continues to provoke heated debate around the world.

Incredibly, the tenor of the debate soon moved on from a discussion of how best to control children’s access to online pornography into a debate on whether such material was harmful for children at all.

This is quite staggering; pornography is a very poor sex educator.  Quite apart from the fact that the majority of pornography includes aggression and violence[1], allowing children free access to pornography neglects their basic right to be protected from all forms of sexual exploitation and abuse. [2]

The day after I took part in the debate a teenager was jailed for his part in the rape of a 14 year old girl.  The court hearing was presented with psychiatric reports that revealed the attacker had watched sadistic pornography on his computer and wanted to re-enact what he had seen.

The fact is that the lives of both the victim and the perpetrators in this case have been blighted because of what took place.  Sadly it may not prove to be an isolated incident; last year in the UK 24 police forces arrested children under 13 for suspected rape while seven detained at least one ten year old.

If children’s understanding of healthy relationships and sexuality is perverted by pornography the implications for the future are terrifying.  We cannot continue to skirt around the issue.  It is vital that we act to protect children, especially when the stakes are this high.

Mr Cameron has pledged stricter internet controls to protect children but online pornography still remains depressingly easy for children to access.  We are still waiting for a date for the debate on this crucial issue which is to take place in the House of Lords.  As soon as we have one I will let you know so that you can have your say and let the Lords know that we must act to protect children and we must act quickly.

[2] Article 34 of the United Nations Convention on the Rights of the Child (UNCRC)
Posted by Mediawatch-UK at 08:50 No comments: