This week we saw what has been described as ‘the bonfire of the quangos’.
Ofcom is to be merged with the postal services watchdog Postcomm but will continue to enforce the Broadcast Code in the UK.  As Jeremy Hunt told Mediawatch-UK last year ‘independent enforcement of this code is one of the things that we think Ofcom has done well’.
Mediawatch-UK can’t agree with this assertion.  It appears to us that Ofcom’s light touch regulation is not protecting the public.  This is summed up in a letter which I received from Ofcom which said:

‘material which has been previously broadcast on television without regulatory intervention is not, by definition, material which might seriously impair the physical, mental or moral health’ of children.

And this from the body which is responsible for upholding the watershed and protecting children from harmful broadcast content.  If this is their reasoning perhaps it’s only matter of time before True Blood is broadcast at teatime and the ultra-violent Saw films are shown during children’s television.
As one of my correspondents pointed out to me: “the lack of proper and effective regulation [in the banking industry] almost brought the country to bankruptcy and this emphasizes just how important regulation really is.”  Could we be facing a similar meltdown in broadcasting standards?
My correspondent considers Ofcom’s response to a complaint he made to be unsatisfactory and so he has referred it to the Parliamentary Ombudsman via his MP.  We will be watching his progress with interest.
Posted by Mediawatch-UK at 06:24 No comments: 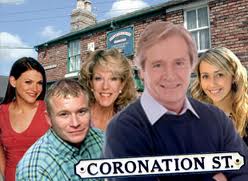 According to reports, Britain’s longest running soap opera, Coronation Street, will be screening its ‘raunchiest ever’ sex scene on Friday 22nd October.  The episode will be screened before the 9pm watershed when plenty of children are likely to be watching.  A member of the production team has been quoted as saying ‘these episodes will be, without a doubt, the hottest ever shown by any soap’.  Apparently the producers are ‘bracing themselves for a backlash of complaints’.
In an effort to outdo each other and up their ratings, the producers of soaps are increasingly pushing the boundaries of what is shown before 9 o’clock. We are now seeing things at 7.30pm which, not long ago, would only have been shown after the watershed.  No longer is anything left to the imagination.
The watershed exists to protect children from potentially harmful and unsuitable content.  Because of this there’s an expectation that programmes shown before 9pm will be suitable family viewing.
From Lolita beds to child-size padded bras in Primark, this is all part of a gradual shift.  Our children are being bombarded with sexual images and references long before they’re ready to deal with them.
David Cameron has condemned this shift, he said there’s a ‘creeping sense that we’re sleepwalking to a place where porn is the norm’.
No doubt we’ll be told this is all harmless fun and won’t change the way in which children who watch it behave.  We would argue that this is incredibly naïve and we’re not alone in this.  Earlier this week the broadcaster Sue Perkins, in an article about the portrayal of gay and lesbian people on television, said that soap operas are the programmes that can really change perceptions because they are "watched by millions of middle Englanders week after week".
Research shows that exposure to sexualised imagery is linked to children's experience of increased anxiety, depression, low self-esteem, body image problems, eating disorders, self harm, and sexually transmitted infections. Children are also becoming sexually active at younger and younger ages.
Producers of soaps need to behave more responsibly; our children deserve better.
Posted by Mediawatch-UK at 06:49 2 comments:

The real victims of our hyper-sexualised society 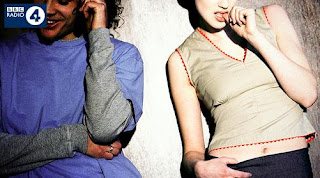 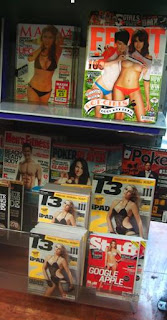 We are convinced that the display of sexually graphic material is a contributing factor to the premature sexualisation of children which are seeing in our society today.
At present retailers have a voluntary code regarding where publications with adult content on their covers are displayed.   However, we are concerned that this isn’t being adhered to and children continue to be exposed to images which they are emotionally unequipped to deal with.
We believe the problem to be widespread but there are no reliable statistics to go on.  In minutes obtained through a freedom of information request the newspaper and magazine supply chain industry group also appeared to be unclear about the scale of the problem.
We think it’s important that we find out and children are protected from these inappropriate displays of adult material.
Make your concerns heard
We have been working closely with the Front Page Campaign on this issue and we have come up with an easy way for you complain if you have seen a newspaper or a magazine with a sexually explicit cover which has been inappropriately displayed.
By filling in an online complaints form here we can raise your concern with the retailer on your behalf and we can also keep a record of how widespread this problem actually is.  If you have already complained to a retailer please do register your complaint so that we can add it to our figures.
Posted by Mediawatch-UK at 03:53 No comments: