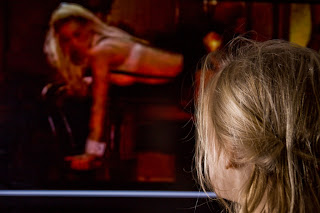 Earlier this week singer Chrissie Hynde hit the headlines when she criticised
scantily-clad stars and branded them ‘sex workers’ for selling music by ‘bumping and grinding’ in their underwear.  She said their performances were doing ‘a great deal of damage’.

It is now completely mainstream for the videos of chart topping artists to include nudity, highly sexualised dancing, violence and references to prostitution.  This summer the video for Rihanna’s latest release, Better Have My Money, was much criticised for its fetishisation and glamorisation of weapons, torture and murder.  What is particularly disturbing about this is that the fan base of all these performers is so young.  Watching them, one could be forgiven for thinking that these videos have been produced to appeal to an adult male audience but, in reality, they are far more likely to be viewed by school children.

This pornification of our culture, created just to sell us a product, is having damaging and far-reaching consequences.  Young boys watching these videos will come believe that women are merely sex objects for their entertainment and young girls will learn that their value lies in their sex appeal and how they look.

Parents who responded to the government’s Bailey Review in 2011 cited music videos as a major concern.  The report subsequently recommended that age restrictions should be applied to music videos to prevent children buying sexually explicit videos and guide broadcasters over when to show them.  In its manifesto the Conservative party promised to “stop children's exposure to harmful sexualised content online, by requiring age verification for access to all sites containing pornographic material and age-rating for all music videos.”

This summer a new scheme to classify music videos came into operation.  Music videos on YouTube and Vevo will now be rated by the BBFC to protect children from seeing inappropriate content.  Some of the biggest recording labels - Sony, Universal and Warner - have agreed to submit the videos they produce to the BBFC before uploading them to the sites but the American offices of these labels have not agreed to the system, meaning any artist who is signed with them won't have their videos subjected to ratings.

In practice this means that some of the most troubling music videos - even the ones that first sparked this move towards a classification system - won’t actually be affected by it.  This may be a step in the right direction but much more still needs to be done to make this truly effective.

Earlier in the year, we wrote to all the new MPs in the 2015 intake outlining our concerns and asking for their support.  We have received several supportive responses and will be meeting with some of the new MPs over the coming weeks to discuss ways in which we can work together in the future.
Posted by Mediawatch-UK at 03:47 No comments:

On 24th August over a billion people used Facebook; this means that on that single day 1 in 7 people on Earth used that social network.

This week the Internet Advertising Bureau published new research showing that social media use has now overtaken entertainment as the UK’s favourite online activity, accounting for almost a fifth of the two hours and 51 minutes a day people in the UK on average spend on the web.

Social media use now accounts for almost 17% of all time spent online whilst the amount of time spent watching TV shows or YouTube videos and listening to music, has almost halved.

The shift appears to be in part driven by people spending more time on mobile devices, rather than desktops.  As a result we are increasingly seeing marketing, education and customer service functions using the medium.

How should we respond to this?  On the one hand social media use has been linked to depression and addiction but it also a positive function as a valuable source of support, community and entertainment. The impact of social media on users depends not on the technology itself but in how it is employed and experienced.

This week it emerged that a 14 year old boy who used a social media app to send a naked photograph of himself to a girl of the same age at school has had the crime of making and distributing indecent images recorded against him by police.  Although the boy was not arrested or charged his name will be stored on a police database for 10 years.

With social media use on the rise, and changing constantly, it is our responsibility to stay informed about the potential benefits and costs of this new digital age and then make deliberate decisions about the type and quantity of technology we use – and, importantly, to which we allow our children to be exposed.  Rest assured that Mediawatch-UK is committed to protecting and campaigning for family values in all media, old, new and social and we value your continued support in this important work.
Posted by Mediawatch-UK at 02:10 No comments: