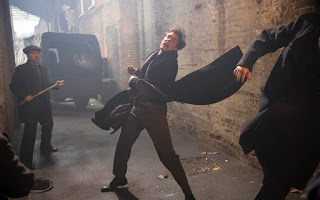 At the end of last year ITV began a new series, Jekyll and Hyde, which was broadcast at 6.30pm on Saturday evenings and aimed at a whole family audience.

The series creator warned that his programme would be ‘scary’ but few who tuned in expected to such gratuitously violent material so early in the evening.  One character was bludgeoned to death within the first minute and it was followed by further violent deaths including someone being set on fire and another being shot in the stomach.  Ironically, anyone wishing to access the programme on ITV’s catch-up service had to confirm that they were over 18 in order to access the show.

Following transmission Ofcom received more than 500 complaints, including one from Mediawatch-UK.  We said that ITV’s transmission of Jekyll And Hyde a full two-and-a-half hours before the watershed was deeply irresponsible.

The show’s writer says TV had to become more extreme to keep up with the proliferation of graphic content online.  Responding to questions before transmission he said: “Some of the parents might get a little upset and some of the smaller kids, but, you know, f*** them.”

Following an investigation Ofcom ruled that ITV broke UK broadcasting rules for airing “violent and frightening” material early in the evening when children were watching.

ent and frightening scenes made this programme – the first in the series – unsuitable for children when scheduled to start at 6.30pm on a Sunday, and without a clear warning before it started.”

ITV, which had argued that the violence was “limited and fantastical” and had refused to move the show to a later slot said that it had “taken this decision on board for future programming.”

Ofcom’s decision is most welcome.  Broadcasters appear to be increasingly tempted to break boundaries in a bid to grab the attention of an increasingly fragmented audience and so strong regulation is vital.  Although we have taken issue with many of Ofcom’s decisions in the past, on this occasion the regulator did what it describes as one of its ‘most important duties’; protecting children from harmful material on television.
Posted by Mediawatch-UK at 09:18 1 comment: