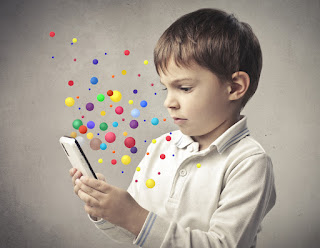 Childline, the confidential counselling service run by the NSPCC, recently released data on the issues which most concerned children contacting its advice line.

In stark contrast to the issues which most concerned children when the charity was founded 24 years ago, in 2016 modern pressures such as cyberbullying and social media affecting children’s confidence and self-esteem were at the top of the list.

Childline warned that Britain’s children are now “deeply unhappy” and have to deal with fears and worries that did not exist 30 years ago.  Many children today are deeply unhappy due to “the pressure to keep up with friends and have the perfect life online ... adding to the sadness that many young people feel on a daily basis”.

And it’s not just children who are made miserable by their online addictions.  Action For Children has found that a staggering one in four parents struggle to control their children’s screen use.

The National Institute for Health and Care Excellence (Nice) advises that children should have TV-free days, or have two-hour limits on the time spent in front of screens. Quite apart from the aim of tackling obesity, it’s a good way of rediscovering the real world that exists beyond the lit pixels.

The internet isn’t going away so the challenge for parents is to teach children to self-moderate their screen time and to become useful members of the digital world.  As parents we also need to confront our own tendency to gaze at smartphone or tablet screens for that elusive email or message: is it really fair to take away our children’s screens while we kept snatching furtive glances at our own?

We are delighted that Mediawatch is able to play a part in informing and empowering parents through both our work raising awareness in the media and talking to parents at school events.  If you would more information on protecting children online please visit our campaign website Safeonline for further information.
Posted by Mediawatch-UK at 08:29 No comments: